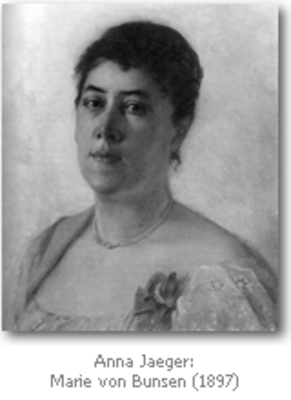 Marie von Bunsen was a German writer, watercolor painter, and literary salon host born in London on January 17, 1860. She was the daughter of Georg von Brunsen, a Prussian politician and Reichstag deputy. Between 1892 and 1927 she was a member of the Association of the Berlin artists and held several exhibitions. She specialized in landscape watercolors.

Marie founded the German Lyceumklub in Berlin and was also a member of various women’s association committees. She inherited the liberal mindset of her parents and joined the left-liberal German Democratic Party in 1918. She travelled through Germany on many river trips before touring Asian countries between 1911 and 1914, all of which she documented. Her other books included biographies of members of European families, a study on an art historian named John Ruskin, and a few volumes of memoirs. She died in Berlin on June 28, 1941.