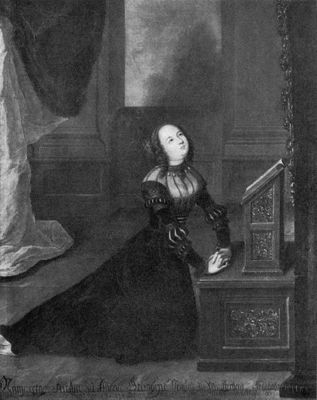 Margaret of Münsterberg was a Silesian princess born on August 25, 1473 to the house of Munsterberg and was the fourth child of the Duke Henry the Elder of Münsterberg and wife Ursula of Brandenburg. She received a religious education from her parents. She became Duchess of Anhalt by marriage to Prince Ernest I of Anhalt-Dessau in 1494.

After Ernest died, Margaret ruled the principality on behalf of her underage sons. Her rule was known for thrift and deep religiosity; she allied with her first cousin Albert, the Archbishop of Magdeburg. She opposed the Reformation and followed suit in 1525 by launching the League of Dessau, which was an alliance of catholic princes who were also opposed to the Reformation. Margaret died on June 28, 1530 in Dessau. Margaret’s sons, when they became old enough to co-rule, built contacts with Martin Luther, but did not lead their Principality into the Reformation until 1534.