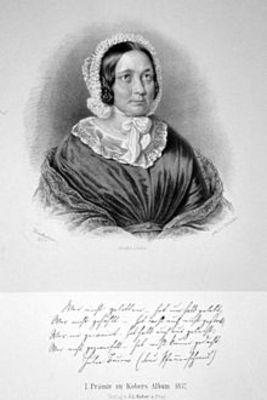 Julie Pfannenschmidt (nee Burow) was a German writer born in Kydullen, East Prussia on February 24, 1806. Her parents separated in 1816 and she lived with her mother’s family in Tilsit. She completed her education in 1819 before Julie and her mother moved to an aunt’s estate in Laggarben. She worked as a teacher in Pohiebels at Rastenburg. Her parents reunited in 1823 and the family moved to Gdansk, where she met a Baubeamten (construction officer) with the last name of Pfannenschmidt. They married in 1831 and moved to Neufahrwasser.

She began writing after being inspired by Professor William Kluz. In Züllichau her husband was denounced for alleged political activity. Afterwards they moved to Bromberg. In 1850 she published her first two-volume novel. Both her novels and short stories dealt mainly with the pettiness of bourgeois life, the conditions of the small towns, and the position of women in the middle-class family. She died in Bydgoszcz on February 20, 1868.