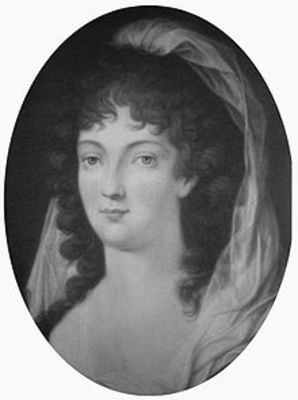 Caroline de la Motte Fouqué was born on October 7, 1773 in Nennhousen, Germany. In 1791, she married Friedrich Ehrenreich Adolf Ludwig Rochus von Rochow in Nennhausen. A year later, she gave birth to their first son. They named him Gustav. A second son, Theodor Heinrich Rochus, was born in 1794 and a daughter Klara followed two years later. Her husband committed suicide in 1799 and Fouqué remarried four years later. She and, new husband, Friedrich Baron de la Motte Fouqué, had a daughter, Marie Luise Caroline. All four of her children survived to adulthood. Her literary works were completed in the last two decades of her life. In 1810, she published her Letters on the Intent and Direction of Feminine Education. Three years later, she followed with Calling German Women and later compiled travel memories and a history of fashion. She also wrote a novel, Resignation. Caroline de la Motte Fouqué died on July 20, 1831 in Nennhausen. She is buried on the palace grounds there.