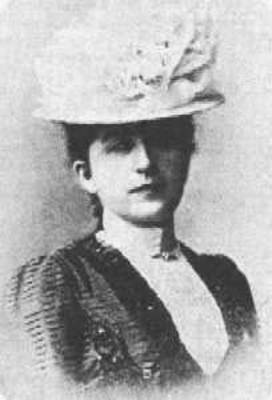 Marie Eugenie Delle Grazie was born on August 14, 1864 in Banat, a region that included parts of modern-day Serbia, Romania, and Hungary. When she was ten years old, her family moved to Vienna, Austria, where she would spend the rest of her life. Grazie attended public school and then entered Sankt Anna, a teacher education institute. Just one year later, she left to study with a university professor of philosophy, Laurenz Müllner. She developed great talents in art and poetry, producing the play “Robespierre” in 1895 after ten years of work. Grazie wrote during a period featuring both drama and great creativity. Other of her works include a drama about miners in 1899, “Schlagende Wetter”, and an 1897 work “Der Schatten”, a dream play. Both were performed in Viennese theaters. Later she turned to prose and wrote autobiographical novels, “Donaukind” and “Eines Lebens Sterne”. Among her most acclaimed works is a short novel “Die weißen Schmetterlinge von Clairvaux”, written in 1925. She died in Vienna in 1931 on February 18th.