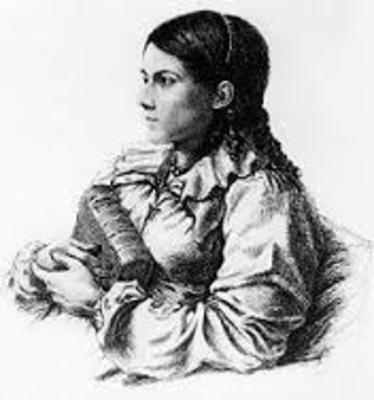 Bettina von Arnim was born Elisabeth Catharina Ludovica Magdalena Brentano on April 4, 1785 at Frankfurt am Main into an Italian family. Clemens Brentano, a poet, served as a mentor and protector to Bettina. From 1794-1797, she was educated at an Ursulines convent school in Fritzlar. Between 1806 and 1808 she worked collaboratively with Clemens and Achim von Arnim, a Romantic poet. The following year she studied voice, piano, and composition in Munich. During that time she published her first song under the name Beans Beor. She sang briefly in the Berliner Singkademie and composed several poems. In 1811, she married Arnim, a Romantic poet, and moved to Berlin. Though married life diminished her literary productivity, Bettina did write several art songs. After Arnim’s death in 1831 she published Goethes Briefwechsel mit einem Kinde, which was mostly fictitious, but was well-received as such. She continued to publish in the creative community until her death on January 20, 1859 in Berlin.